My "Crashing the Gate" Book Review 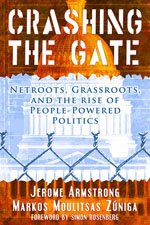 I don't get to read much these days, let alone write book reviews, but "Crashing the Gate" is a truly amazing book. If you're reading this blog, then you're probably already plugged into the Daily Kos and MyDD.com "liberal blogosphere."

But even if you're not, this book is a great, quick read about the state of the Democratic Party, and how everyday Democratic activists who care need to take it back if we want to save the party, save the country and save ourselves.

I tried reading it with a critical eye because I'm already such a part of the liberal blogosphere that I didn't want it to come off as a narcissistic puff piece.

Incidentally, Beyond Chron was partially inspired by blogs such as Daily Kos. The SF Chronicle certainly isn't doing a good job monitoring the excesses of Gavin Newsom and Arnold Schwarzenegger, and somebody has to be out there speaking up for progressives in the media.

Democrats Show How Out of Touch Gavin Newsom and Bevan Dufty Really Are...

Here's an article I wrote for today's Beyond Chron:

At last Thursday’s meeting, the S.F. Democratic County Central Committee (DCCC) voted 22-4 to endorse Proposition B, the Eviction Disclosure Ordinance. At a time when more tenants are being evicted under the Ellis Act than during the dot-com boom, our local Democratic Party took the right stand on an issue that affects the heart and soul of San Francisco. It also showed how out of touch Mayor Gavin Newsom and Supervisor Bevan Dufty are with those who have supported them in the past – as well as how the City is changing.

Prop B will not cost the taxpayers a dime, and does not put any restriction on the right to own property. It merely requires real estate brokers at an open house to notify potential buyers that a tenant was evicted under the Ellis Act to make this property vacant. Because speculators have made millions out of targeting our most vulnerable tenants for T.I.C. conversions, and buyers have to pay more for a vacant property, the real estate industry should not hide their dirty little secret as they ruthlessly gentrify our City. San Franciscans pride themselves on being socially responsible consumers, and 85% have walked away from open houses when informed about an eviction on the property.

There are only two reasons why Prop B is even on the June ballot, and they are called Gavin Newsom and Bevan Dufty. After the Board of Supervisors voted 7-4 to approve this legislation, Mayor Newsom vetoed it. Supervisor Dufty refused to change his vote and override the veto, which requires 8 votes. Therefore, Supervisors Peskin, Maxwell, Daly, Ammiano and Mirkarimi had no choice but to put it on the ballot this June.

While one could expect some other Supervisors to oppose Prop B because they represent more conservative districts, Bevan Dufty’s district has a majority of tenants and has had more Ellis evictions than any other part of the City. Many of these tenants in District 8 (Castro and Noe Valley) have lived in the neighborhood for years, were pioneers in the gay rights movement, and are now dying of AIDS. In fact, the Castro has earned the dubious distinction as the “AIDS Eviction Capital of the World.”

The DCCC has generally sided with Newsom and Dufty in the past. In 2002, they endorsed Bevan Dufty – although there were two strong Democrats running in that race and the Committee could have easily remained neutral. In 2003, they endorsed Newsom for Mayor, although it was a non-partisan race and the majority of their constituents (i.e. registered Democrats in San Francisco) supported and voted for Matt Gonzalez. In 2005, when public transit advocates pushed for Prop D that would have weakened the Mayor’s control over Muni after two fare hikes, the DCCC overwhelmingly voted to oppose it.

Newsom and Dufty may try to distance themselves from opposing Proposition B, but the fact remains that it would already be law if they hadn’t stood in the way. Now that it’s on the ballot, the DCCC has shown how out of touch Newsom and Dufty are on this issue. For Bevan Dufty, it also shows how critically important it will be for progressives to challenge him with a strong candidate in November. It also raises the question: is there anything that Newsom and Dufty wouldn’t do to support real estate speculators?

Paul Hogarth is a life-long Democrat who has been actively involved in the Party for 10 years. He is a member (and former officer) of the Harvey Milk LGBT Democratic Club.

Paul Hogarth is a lawyer at the Tenderloin Housing Clinic in San Francisco, having worked there since 2000. He has a Bachelors in Political Science from UC Berkeley, and a J.D. from Golden Gate University. Paul made his first run for public office at the age of 22, when he was elected to the Berkeley Rent Stabilization Board. After one term, he moved to San Francisco where he is actively involved in local politics. In 2006, Paul was hired as the Managing Editor of Beyond Chron (http://www.beyondchron.org), a blog published by the Tenderloin Housing Clinic that was voted "Best Local Website" in 2008 by the SF Bay Guardian. He is active in the netroots (cross-posting at Daily Kos, Open Left, Huffington Post, Calitics and is now writing at AmericaBlog.) Paul was voted "Best State and Local Blogger" at the Netroots Nation conference in 2010.

Former Berkeley Rent Board Commissioner (2000-2004), Correspondent of the Harvey Milk LGBT Democratic Club, third-year law student at Golden Gate University, summer intern at Equality California, former tenant organizer at the Tenderloin Housing Clinic (and current Board member), member of the National Lawyers Guild. In other words, I'm a progressive activist living in San Francisco who tries to comfort the afflicted and afflict the comfortable.