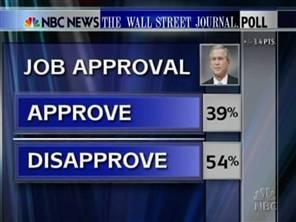 NBC News has a new poll today showing George W. Bush's approval ratings down to 39% -- with 54% of Americans disapproving of his job as President. Only 28% believe that the country is headed in the right direction, and a pitiful 29% believe that Harriet Miers is qualified to serve on the Supreme Court. Evidently, George's effort to castrate Social Security, the federal government's criminally incompetent response to Hurricane Katrina, Tom DeLay's indictment, and the illegal, idiotic and unjustified quagmire in Iraq has finally caught up with Dubya.

While liberal bloggers are celebrating this news, and hoping that it will translate in Democratic congressional victories in 2006, I'm eternally frustrated. Why the fuck didn't this happen ONE YEAR AGO, when there was actually hope to get rid of this Clown, kick his ass out of the White House and bring some level of sanity back to our government?? It may be to an extent satisfying to know that the American public has finally woken up, but with all the devastation that Bush and his boys are doing on a daily basis, saying "Don't Blame Me -- I Voted for Kerry" just doesn't gratify me right now.

George and his ilk have already proven that they have no respect for the American people, so do you really think that low approval numbers now will change the way they act for the next three years?? Look at Harriet Miers. And unlike Bill Clinton, who obsessed during his second term about his place in history, George W. Bush doesn't care how history will judge him because "we will all be dead."

It's amazing what a difference a year makes -- which leads me to another question. If Bush was re-elected with 51% of the vote, and now 54% of Americans disapprove of him as President, there's gotta be a lot of sorry voters out there with a case of Buyer's Remorse. To my knowledge (and I could be wrong), there haven't been any news stories lately about people who voted for Bush last November, and now deeply regret it. If there haven't been, one of the following must be true:

(a) The Media has (once again) failed miserably at reporting a very obvious and pervasive story; or

(b) Maybe Bush didn't win that election after all.

P.S. Reason #6,045 why the media is not liberal, take a look at the ridiculous spin that NBC is taking on their own poll:

It has been weeks since Hurricane Katrina slammed into the Gulf Coast; since gas prices began spiking to record highs; and since Cindy Sheehan, whose son was killed in Iraq, held her antiwar vigil outside President Bush’s Texas ranch. But, according to the latest NBC News/Wall Street Journal poll, the fortunes of the Bush administration and the Republican Party have not yet begun to recover.

As if somehow those poll numbers deserve to "recover"?? What happens if Bush's approval continues to sink even further?? Oh, but no. NBC wouldn't want that happen, now would they?

Paul Hogarth is a lawyer at the Tenderloin Housing Clinic in San Francisco, having worked there since 2000. He has a Bachelors in Political Science from UC Berkeley, and a J.D. from Golden Gate University. Paul made his first run for public office at the age of 22, when he was elected to the Berkeley Rent Stabilization Board. After one term, he moved to San Francisco where he is actively involved in local politics. In 2006, Paul was hired as the Managing Editor of Beyond Chron (http://www.beyondchron.org), a blog published by the Tenderloin Housing Clinic that was voted "Best Local Website" in 2008 by the SF Bay Guardian. He is active in the netroots (cross-posting at Daily Kos, Open Left, Huffington Post, Calitics and is now writing at AmericaBlog.) Paul was voted "Best State and Local Blogger" at the Netroots Nation conference in 2010.

Former Berkeley Rent Board Commissioner (2000-2004), Correspondent of the Harvey Milk LGBT Democratic Club, third-year law student at Golden Gate University, summer intern at Equality California, former tenant organizer at the Tenderloin Housing Clinic (and current Board member), member of the National Lawyers Guild. In other words, I'm a progressive activist living in San Francisco who tries to comfort the afflicted and afflict the comfortable.